BEYONCE BETRAYING ALL BLACK AND ASIA WOMEN!!! IS SHE?

Too many black and Asian children grow up understanding the sad truth that to have dark skin is to be somehow inferior.
The young daughter of one of my relatives even tried to scrub her ‘dirty’ skin off with a Brillo Pad, such was her loathing for her natural colour.
Of course, black and Asian parents work hard to give their children a positive self-image and confidence in their appearance, despite the cultural forces stacked against them.
But when black celebrities appear to deny their heritage by trying to make themselves look white, I despair for the youngsters who see those images.

THE QUEEN B WE KNEW: THE POP STAR BEYONCE KNOWLES ON STAGE IN 2008

My fair lady! Blonde bombshell Beyonce shows off her lighter side
In truth, it is hard now to tell she is the daughter of an African-American father and Creole mother. It was three years ago that L’Oreal was accused of whitening Beyonce’s face in a magazine advert, a charge denied by the company. But now there she is, looking like a willowy Caucasian

OBAMA AND HIS FAMILY 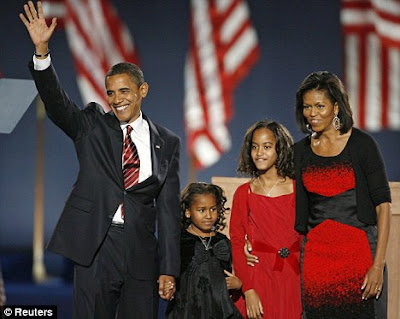 The Obama family are rightly proud of their skin, but why is it that non-European body shapes and colours are still not thought to be beautiful?

Demand is high, too, for dangerous hair-taming products, some of which burn the hair and scalp.
So why do all these women want to be whiter? The warped values they subscribe to evolved out of colonialism: white people were not only powerful but like mythical gods, physically superior and invincible.
The rulers believed it, and their subjects ingested the message. In India, the skin hierarchy was set down before the time of the Raj by Mogul aristocrats who were light-skinned.
So why do these attitudes persist so long after independence in the 21st century? Academics studying these trends say it is because of globalisation and the emergence of ‘international beauty’ prototypes, based on the looks you see in fashion magazines and films.
Posted by Sporah TV