SPORAH: Although the name Issa Michuzi is so popular but our readers would like to hear from the man himself.  So who is Issa Michuzi?
MICHUZI: He is a journalist who unexpectedly happened to become a popular blogger whose blog has a worldwide readership, bearing in mind that I initially took blogging as a hobby, before I decided to take it seriously.
I remember I started in 1980, using my brother-in-law’s camera, which my in-law’s younger brother and I ‘stole’ in order to use it to take snaps at different locations. Eventually I found myself falling in love with photography. Five years later, a friend of mine gave me a Pentax Spotmatic as a gift which ironically didn’t even know how to operate. Fortunately, by then there were some photography classes at Goethe Institute (at the IPS Building). I recall my first instructor was Tom Mwewuka from the US Info Services. The practical part of the studies led me to taking snaps on the streets, and I eventually found myself at the YMCA Hall where popular DJs Kalikali, Negre Jay, and others were deejaying. Most people have no idea that the pictures I used to take by then were basically for the sake of earning enough money to develop the films (and not to make any profit) and for my photography class practicals. After finishing my course I continued going to the YMCA to take pictures, as well as doing so in the streets where I would photography whoever wanted my service. I think people were impressed with the quality of the pictures I took that they kept on demanding my service. I remember my first pictures ever to be used in a newspaper were taken at a building which collapsed at Msimbazi Street and two people lost their lives. A popular newspaper by then, Mfanyakazi used four of the pictures I sent them.
But establishing myself as a photographer really took shape when one day in 1989, Jah Kimbuteh and his Roots and Culture band performed at the YMCA, and I was asked to do a photo shoot. Among those in attendance to the event was Attilio Tagalile from the Daily News, who just happened to come without a photographer. He then asked me to give him one of the pictures I took, and that was the first time ever the paper used an artist’s picture on the front page. I think they were very impressed with how I photographer Jah Kimbuteh with his dreadlocks ‘flying in the air’ while singing with deep emotions. Since then, Tagalile encouraged me that I would make a good photojournalist.
Moreover, the Daily News’s chief photographer, the late Vincent Urio, who owned his own photo studio known as ‘Studio Laura’ was impressed by my skills and contracted me. I then continued with my practices with the best of the best in photography, who taught not only taught me the art of photography but also dark room techniques, especially on how to develop black and white films and printing.
I officially joined the Daily News on January 1st, 1990, and two years later I was offered a scholarship to go to Berlin, Germany to gain further skills in photography. When I came back, I joined the Tanzania School of Journalism (I was there from 1994to 1996).Upon completion; I was offered another scholarship to go to Cardiff, Wales for advanced training in political photojournalism. We were among the first to be taught about digital photography by then. I recall Canon and Kodak were working in partnership to make the first digital camera, which they eventually brought it at the college, offering us a rare opportunity to participate in their quest for developing digital photography. 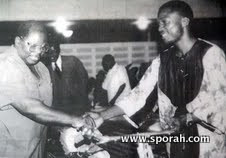 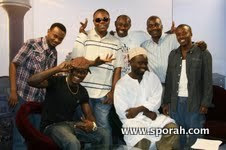 SPORAH: What encouraged you to start a blog (bearing in mind that in those days blogging was still a foreign thing to majority of Tanzanians)? Also, as an undisputedly most popular Tanzanian blogger, could you give us a brief history of your blog?
MICHUZI: I think I was encouraged by my friend Fidelis Tungaraza who is living in Helsinki, Finland. Each time he sent me an email, he challenged me that Tanzanian journalist were not catching up with global trends, and as a result were denying Tanzanians in the Diaspora opportunities to know more about what was happening in their country.
He never got tired of pressuring me to pioneer efforts to bridge the information gap that existed by then. I then happened to travel to Finland to cover The Helsinki Conference in 2005, accompanying President Jakaya Kikwete (who was by then the Minister for Foreign Affair), the UN Deputy Secretary General, Dr Asha Rose Migiro (Minister for Community Development, Women and Children, by then), and other government officials.
While in Helsinki I met a U-S-based friend of mine, who was invited to the Conference as a blogger. I got so much excited, especially as there was virtually no blog in Tanzania. A handful of bloggers from the country-like Boniface Makene, Da’Mija, Marco Polo, John Mwaipopo, and others- were by then all foreign-based. With technical support from Ndesanjo Macha adding up on top of the encouragement from Tungaraza, I decided to start blogging on September 8, 2005.When I got back home; I continued blogging passionately, providing timely coverage of local news and events. The wealth of pictures and news has have successfully made my blog uniquely popular within and outside Tanzania.
SPORAH: How do you manage to balance your time between serving your employer (to whom you work as a photojournalist) and your blog which you seem to work in full time? Secondly, how do you draw a line between your employer’s interest and your blog’s (for instance, which pictures to appear in your blog and which in the newspaper you work as a photojournalist)?
MICHUZI: I am a quite a well-organised person. Also, courtesy of my benefactors, I have been able to get a lot of support and assistance from reputable journalists from almost certainly every corner of Tanzania, who frequently send me news and pictures. We also get a lot of pictures and news from oversees. Additionally, I have a strong team of people who edit the news and pictures sent to me, and they also have their own material to be published in the blog. Some I am not working alone. Behind me is a strong team of journalists. Combined with pictures and news sent from ‘wadau’ (informal stakeholders) all over the world, I certainly am not overburdened.
I have successfully managed to draw a fine line between my role as a blogger and as a TSN Journalist, mostly because I am not a photographer at the Daily News but a sub-editor. Prior to that, I was an on-line editor, managing the Daily News’s website. I still do the photographing but not as my primary role, as there are other photographers doing the job. For that matter, there’s no chance of any conflict of interest. And if there is a need to choose which picture should be used in the newspaper, then the decision is my bosses’. The pictures I use in my blog are either sent by my associates and member of the public, if not taken by myself.
SPORAH: How do you interact with your blog readers?
MICHUZI: Ah, that’s so easy. As you know, social media networks are quite different from radio, TV or newspapers in the sense that in social media there is a place for readers/visitors to comment. Therefore, the interaction is automatic, and if there’s a section on my blog where readers/visitors can leave their queries or share whatever news they might have. Furthermore, my email address issamichuzi@gmail.com is widely known. So I engage my audience by either writing to them to seek their opinion or criticism. On average, I receive at least 1000 emails and I do my best to respond them all of them. 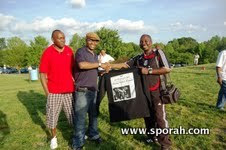 SPORAH: Because blogs are part of social media, and because you are among the first pioneers to embrace the trend, how would you describe the role of social media in Tanzania, and how it evolves?
MICHUZI: Social media has truly inspired an information revolution in our country. Gone are days when you had to wait until the following day to know what happened today. Although it might take some time, but the mainstream media would have to work really hard. And the ‘traditional’ media outlets which ignore the presence and effectiveness of social media must understand that they might be digging own graves. Nowadays a ‘normal’ reader could become a self-made journalist by using social media. Gone too are days when people were ‘spoon-fed’ with one-sided stories without a reader having an opportunity to comment on the news. This is a new era in which news could be easily access on your mobile phone, which does not necessarily have to be the priciest ones. I heard some of you guys living abroad do not buy newspapers and just get news from the internet. Such a trend is gradually becoming prominent in the Third World.
SPORAH: A related question, apart from blogging, do you use other social media such as Twitter, Facebook, YouTube, Tumblr, etc?
MICHUZI: Yes, I do frequently use them. I am on Facebook, I Skype, I am on Google+, and I have my own YouTube channel (mdauwalibeneke). My blog is connected to all these services, and that really helps to bring more readers to it.
SPORAH: A blog with few readers but achieving your aims for creating it in the first place, or a blog with massive number of visitors but not necessarily meeting your aims?
MICHUZI: Both. My aims and my readers’ expectations, needs, etc. As a journalist, my aim and role is to impart information to meet the needs of the public.
SPORAH: In conclusion, what would you like to tell our readers, yours and the public in general?
MICHUZI: I can’t find anything that I have not said or mentioned. Perhaps I should give a massive ‘THANK YOU’ to all who visit Michuzi Blog, and I would like to tell them I am their humble servant, and should not hesitate to tell me how best I can serve them. I respectably promise to fulfil their wishes/needs. I wouldn’t be here without them; they have been with me through highs and lows, thick and thin. To every reader of your magazine, I just want to let them know they made the right decision to choose it, and they should keep supporting it. Although you might not know, you are doing our nation an exceedingly great service. History will certainly tell that.


SPORAH: Thank you Issa for your time.


THANKS TO:
Issa Michuzi
Evarist Chahali
The Sporah Show' Crew.